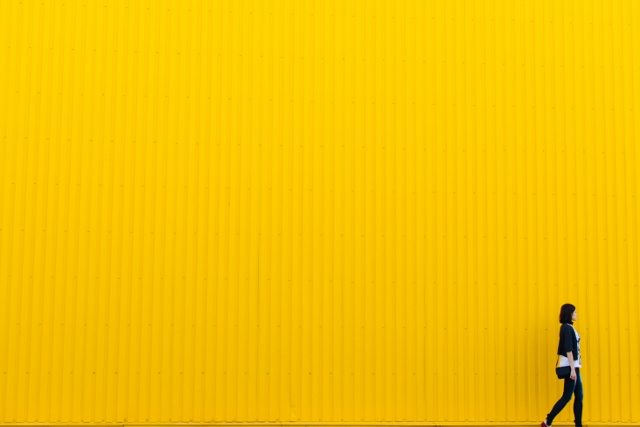 There’s a meme about entry level positions where the requirements to be considered include a minimum 5 years experience in a similar role. It’s a joke, of course, no employer will reasonably expect you to have performed a job before hiring you to perform it for the first time, but it does hit on a growing reality for many graduates:

The job market is getting tougher and tougher.

According to the annual survey conducted by Graduate Careers Australia, in 2015 68.8% of graduates were employed full-time four months after completing studies. While up from 2014, the overall trend is down from 85% in 2008 and is still below early 90s figures, a period in which Australia experienced severe recession and unemployment.

You have graduated. Or you are about to, with a group of people with very similar technical skillsets as you. Therefore, it is up to you to differentiate yourself from them to improve your employability prospects.

I think for lots of you, this advice isn’t particularly revolutionary and I don’t think I’m the first person to tell you it. But it’s important to set up, because there’s another part of that advice which often gets forgotten:

You need to differentiate yourself and stand out from the rest in a way an employer understands and cares about.

It’s hard. You probably don’t know what an employer wants nor do you know what attributes you have that meet those requirements. More often than not, while your degree matters to some extent the type of job you can apply for (journalism grads like myself don’t become neurosurgeons), whether you’re hired depends on a lot of other different factors unrelated to your field of study.

The National Association of Colleges and Employers’ Job Outlook 2016, which surveyed employers’ on what they look for in graduates, found only 59.6% of respondents looked for technical ability in their grads. This is compared to 80.1% for leadership skills and 78.9% for demonstrated ability to work within a team. In fact, technical ability was the 10th most important skill for a graduate, behind written and verbal communication skills, problem-solving skills, strong work ethic, initiative, analytical skills and flexibility.

Check out entry-level positions and you’ll find the same terms over and over again as well. A quick look on job-search platform Seek shows these terms outweigh a qualification in the field every time. 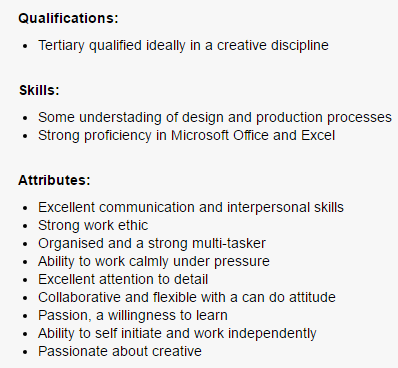 Look closely. Only one dot point is dedicated to technical ability compared to several more very specific points on non-technical attributes. As you can see in both examples, tertiary qualifications are sometimes not even a specific requirement for an entry-level position!

So what does this mean? Well, for lots of jobs, the skills are learnt as you go along. As we already established, no employer is going to reasonably expect you to be able to perform a job before you’ve performed it (if an employer does have that expectation, you should strongly consider whether the associated stress is worth it), but employers are going to expect you have workplace skills.

Workplace skills, known as soft skills or transferable skills, are those skills which identify you as an employee who is capable of working effectively both independently and within a team. They are social skills which mean an employer doesn’t have to manage your every step to ensure you’re doing your job.

Let’s look back at the top ten attributes in that list again. The first nine are all workplace skills then technical ability. The job ad examples? Predominantly workplace skills.

It’s important to note as well, the two ad examples don’t ask for exactly the same thing. Example 1 wants you to be able to work within a team, while Example 2 specifically asks that you are capable of working independently. Just because employers are trending towards certain attributes, doesn’t mean all employers want the same thing. You need to be able to understand those differences.

Understanding what an employer wants is the easy part. Understanding how your skillsets meet those wants, how best to articulate that to employers and how to understand the differences between positions isn’t. In Module 1 of the Successful Graduate Training Course, you’ll identify your attributes, learn how to read and understand a job advertisement and start to build your resume vocabulary so you can hit those points as effectively as possible.

Start learning how to become a graduate employers want to hire today. If you haven’t started the Successful Graduate Training Course, here is the link.

Answering selection criteria 101
Why has an employer written this stuff?Selection criteria are a strange beast. Answering selection criteria is even stranger. This is a sister post ...
6 Kiat Sukses Untuk Mendapatkan Pekerjaan Pertama
Mencari pekerjaan pertama setelah lulus kuliah memang tidak mudah. Namun 6 tips dibawah bisa membantu bagi kamu yang sedang berburu ...
Resume templates don’t work. Self-awareness matters.
This post is part of an ongoing series on resume writing focussing on whether you should be using resume templates (tl;dr you shouldn’t). We ...
Job interview tips: it’s all about the employer
We’ve looked at resumes (and we’ll continue to do that more) but it’s time to start thinking about what you should be doing at the next stage. ...
Successful Graduate Podcast 01
What does all the noise about graduate employability actually mean?In this, our first Successful Graduate podcast episode, Anton Crace interviews ...